There's still so much to learn about island spotted skunks. Members of the Island Spotted Skunk Working Group are actively pursuing research that will help us conserve this cryptic mesocarnivore. 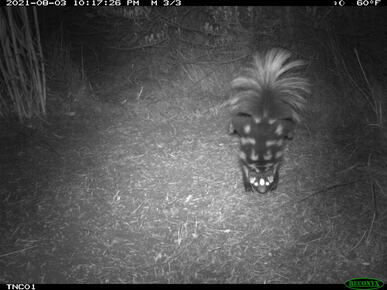 Project Lead: Juliann Schamel, National Park Service
​
Question(s):
​
1. What are the seasonal activity patterns, peak activity times, and activity overlap of island spotted skunk and island fox, and are there interannual variations in these patterns?

2. How have activity patterns of island spotted skunk and island fox changed in response to the Scorpion Fire on Santa Cruz Island?

Impact and Next Steps: Using these methods, we hope to identify scenarios, including wildfire, that may lead to greater chances of encounter between island spotted skunk and island fox. 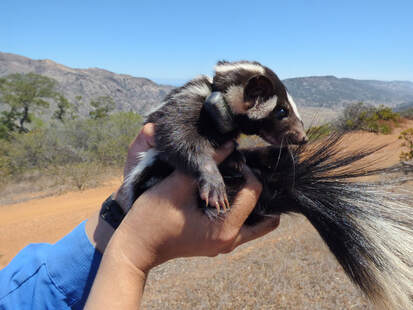 ​Methods: We used GPS and VHF (Very High Frequency) collars on Santa Cruz Island foxes and spotted skunks to look at how these two species traveled through different habitats and terrain on the island. We also used remote cameras to look for potential interactions between the two species at spotted skunk dens. Finally, we piloted scent stations (with a fish oil lure) as a method for increasing detection of spotted skunks at camera traps. 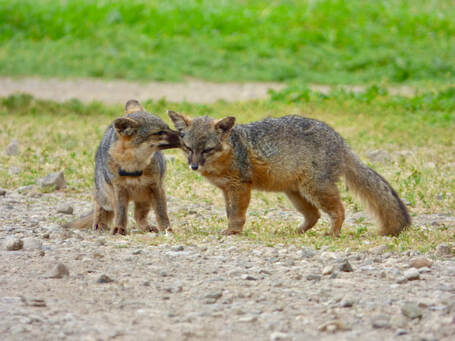 A GPS collared fox interacts with an uncollared fox. Photo by Calypso Gagorik
​Results:
1. We found that spotted skunks and foxes use the island very differently. Relative to foxes, spotted skunks maintained a larger home range over time, but only visited a fraction of that area over a shorter time period of weeks or months. In contrast, foxes tended to move through a large portion of their entire home range in a single week.
2. We collected footage of a fox disturbing a spotted skunk at a den site during the day, but no evidence of direct predation.
​3. We found that cameras placed in drainage bottoms may be better at detecting spotted skunks compare to cameras placed on ridgetops. We also found that foxes tended to monopolize scent stations, which may actually be a deterrent to spotted skunks.
​
​Impact and Next Steps: Knowing that a) home range size of spotted skunks is much larger than previously thought; b) cameras placed in drainage bottoms detect skunks more frequently than those on ridgetops; and c) scent stations may actually be counterproductive in areas of high fox density, will  help managers develop methods to accurately estimate island spotted skunk population sizes. 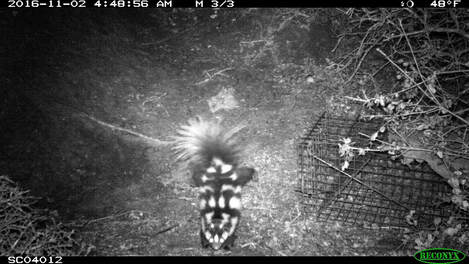 Methods: We superimposed wildlife cameras at fox traps in 2016 and 2017 on both islands and compared skunk detection rates with the two methods. Cameras were in place for 6 months through the summer, fall and early winter, overlapping the season of fox trapping (summer/fall).

Results: On both islands, detections rates of skunks in either traps or cameras during the summer were similar and very low, with ≤ 1 detection / 100 operating nights, giving confidence in either method for monitoring during that season. However, detections using cameras in 2017 increased from summer to early winter, suggesting that fall/winter may be the most effective season for monitoring skunks.

Impact and Next Steps: Consistently low detection rates for island spotted skunks across both traps and cameras (<1/100 operating nights) suggest that skunks are rare on both islands. This low detection rate is comparable with other spotted skunk populations that are being given consideration for endangered status at the state or federal level. Next steps include refining estimates of skunk populations using either island-wide occupancy estimations or mark-resight estimations with identification of individual pelage patterns. 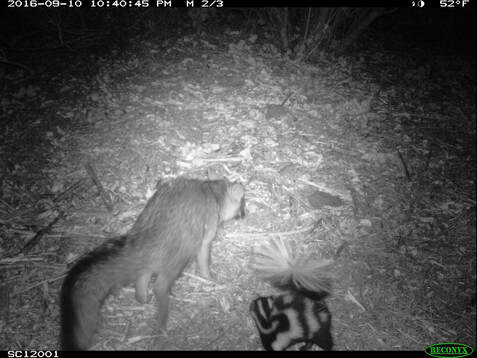 Methods: We evaluated microhabitat associations of island spotted skunks and island foxes across both islands using detection data from live traps and wildlife cameras collected during 2015–2017 and measurements of 10 microhabitat characteristics. We analyzed fine-scale temporal activity using camera data from 2016 and 2017.

Results: On both islands, skunks had a positive response to ground-level cover provided by rugged topography or woody vegetation such as shrubs or trees, whereas foxes had a weak or negative response, suggesting partitioning of these microhabitat characteristics. Additionally, on both islands the peak in timing of skunk activity offset the peak for foxes, which implies that skunks use fine-scale adjustments in activity to avoid foxes.

Impact and Next Steps: Habitat degradation from grazing by exotic herbivores likely reduced habitat refuges for skunks to avoid interactions with foxes. However, we found that skunks use fine-scale adjustments in space and time to avoid foxes; as conservation efforts target habitat restoration, there is hope for improved prospects for coexistence of island spotted skunks and island foxes. 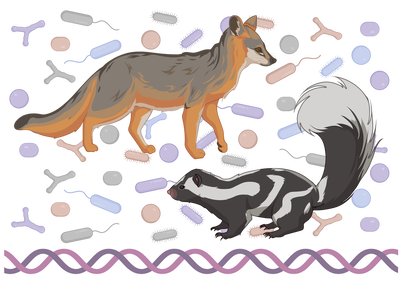 Questions: Organisms are a lot more complicated than they initially appear. What may look like a skunk or fox is actually an entire ecosystem containing millions of microorganisms! Collectively termed the microbiome, these microorganisms function in all sorts of physiological processes, like digestion and immunity. However, little is known about their composition and function in wildlife populations, like island spotted skunks.

Methods: We formed a team of field biologists and laboratory researchers to examine the host-associated microbiome of island spotted skunks and island foxes. Together, we are collecting rectal swabs from skunks and foxes on Santa Cruz Island and Santa Rosa Island. We will subsequently sequence microbial DNA and identify which microbes inhabit the digestive tract of each host species.

Results:  We anticipate that gut microbiomes will differ between species and islands, due to behavioral and environmental differences between the animals sampled. However, we also anticipate that skunks and foxes will harbor microbes that are common to other mammalian carnivores sampled in North America. We will quantify the degree of similarity between each group of animals sampled, and link patterns of microbial diversity to ecological variables like diet.

Impact and Next Steps: This study will provide important baseline information on the host-associated microbiome in Santa Cruz and Santa Rosa island spotted skunks and island foxes. This will allow us to better understand how microbes impact their hosts in wildlife, and will enable us to monitor island spotted skunks and island foxes for the emergence of harmful microbes that may cause disease. 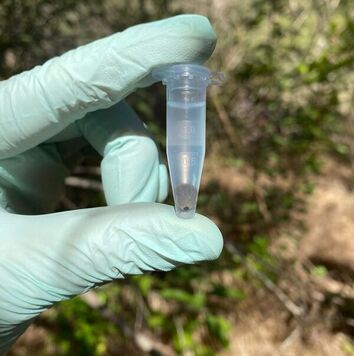 Question(s): How do mammalian species assemblages on different islands affect transmission of vector-borne pathogens like Bartonella and Borrelia (the bacteria that causes Lyme disease)?

Methods: We are collecting fleas, ticks, and blood from mice, foxes, and skunks, and testing for parasite-mediated spillover of bacterial pathogens.

Impact and Next Steps: These analyses will shed light on the roles of these different species in maintaining pathogenic bacteria, and the flea and tick species that may be responsible for pathogen transmission. More broadly, this study will contribute to questions in disease ecology related to the effects of host and parasite community composition on the maintenance of zoonotic pathogens.

Collaborators and Funding: The Nature Conservancy, the National Parks Service, University of Wisconsin 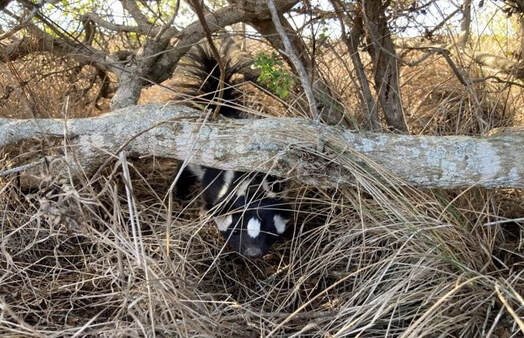 Question(s):
1. How distinct is each Island population compared to one another and to mainland spotted skunks?
2. What are the current and historical effective population sizes on each island?
3. How inbred are these populations and what is the genetic load of each population?

Methods:
We will perform whole genome sequencing on skunks from each island and from mainland California to estimate differentiation, inbreeding, and both current and historical population sizes. We are in the process of sequencing a small number of individuals to obtain preliminary genomic data.

Impact and Next Steps: Considering the degree of divergence of island spotted skunks from one another and from mainland spotted skunks may support managing each island population as distinct evolutionarily significant units. Also, understanding the level of inbreeding and genetic load will help guide conservation efforts. 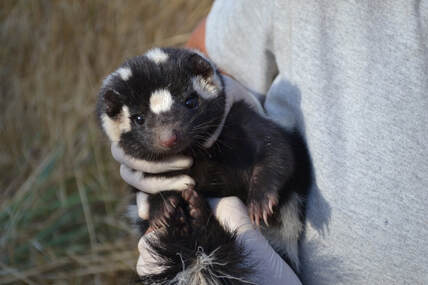 Question(s): How and when did spotted skunks arrive on the California Channel Islands?

Methods: We sequenced the complete mitochondrial genomes of 55 skunks from Santa Cruz and Santa Rosa islands and the mainland (California and Arizona), then examined phylogenetic patterns and estimated isolation times among populations.

Results: A haplotype network analysis found a single maternal ancestor/colonization event on Santa Rosa Island. Additionally, there are no shared haplotypes between island populations, suggesting colonization and divergence of the two island populations happened in the same time frame. Divergence estimates from three analyses suggested skunk colonization occurred in the early Holocene, shortly before the split of the super-island Santarosae into Santa Cruz and Santa Rosa islands 9,400-9,700 years ago. Such a scenario of colonization could be explained either by rafting or one-time transport by Native Americans.

Impact and Next Steps: Island spotted skunks are currently considered a subspecies of western spotted skunk. However, our study demonstrates that Santa Cruz and Santa Rosa islands support an endemic lineage of spotted skunks with genetic diversity that is spatially restricted and has a distinct evolutionary history. Hence, re-evaluation of the taxonomic status of island spotted skunks may be warranted, along with management of each island population as distinct evolutionarily significant units. Future research analyzing the nuclear genome can further clarify the demographic histories of these populations and evaluate inbreeding depression.

Diet and Resource Use 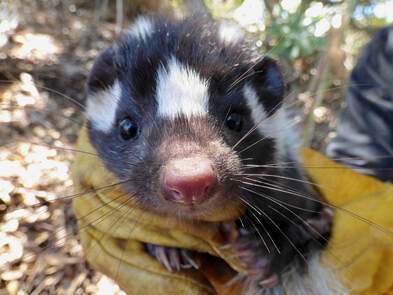 Question(s):
1. How much does the seasonal diet of island spotted skunk and island fox overlap across the variety of island habitats?
2. Are island spotted skunks a prey item for island foxes?  Specifically, are island fox predating skunk kits and provisioning them to their own offspring?
3. How did the drastic fluctuation in species density of both skunks and foxes from 2010 to 2020, and the ongoing drought, impact intra- and inter-specific dietary competition?

Methods: This project is using stable isotope analysis of serially-sampled whiskers collected from island spotted skunks and island foxes on Santa Rosa Island from 2010 to 2020 to assess individual seasonal diet. Each whisker provides roughly 4-6 months of dietary information, accompanied by a wealth of demographic data.

Impact and Next Steps: Stable isotope data will allow us to plot dietary niche overlap at the species level, as well as assess proportional diet at both the species and individual level from a prey space map we are creating using key documented prey items: fruit, insects, marine resources, and vertebrates (mice, lizards, and birds).

​Status: Ongoing - read more about this project on the Western National Parks Association website!
Powered by